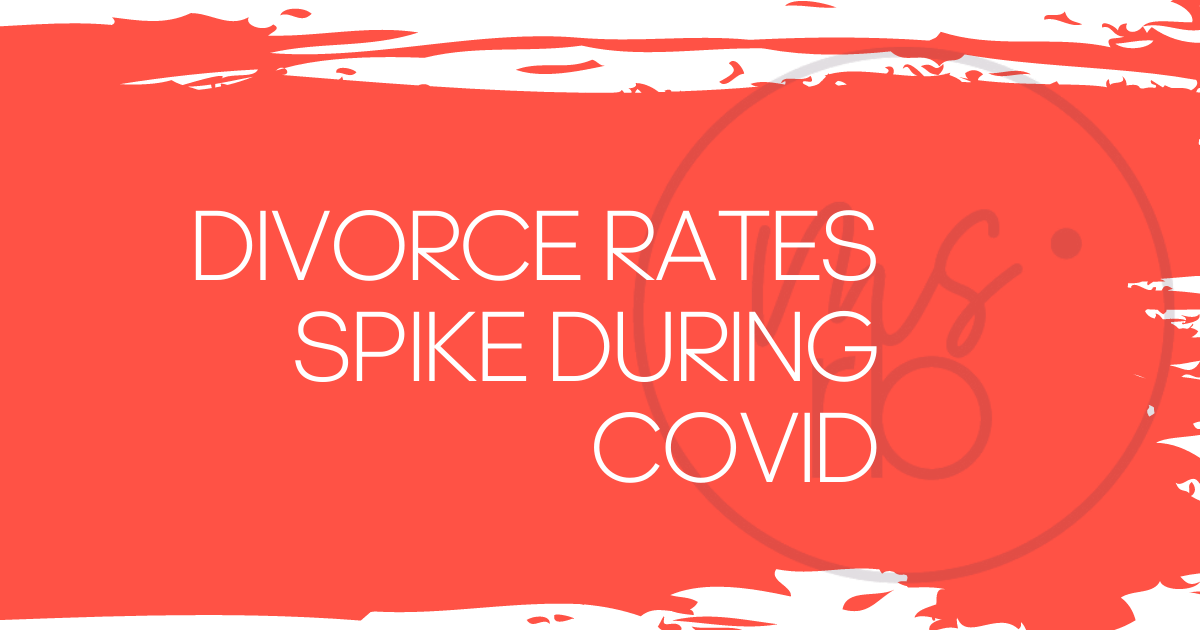 A new study just came out reporting on the impact of the pandemic on marriages and the divorce rate. Legal Templates reported that divorce rates spiked by 34% during the pandemic and that Newlywed’s divorce rate doubled especially for those married under 5 months. They started increasing on April 13  which is just about 3 weeks after most states had locked down.

Highest Divorce Rate in States Most Impacted by COVID

Interestingly, Southern States in the bible belt have the highest statistics. The 5 states that have been substantially impacted by COVID, happen to be the 5 with the highest divorce rates – Mississippi, Oklahoma, Arkansas, Alabama, Louisiana.

Why are Divorce Rates Spiking?

So what is going on? Between Quarantine life, unemployment, financial stress, child care issues, mental illness, deaths of loved one, relationships are following apart…or maybe they were rocky to begin with and these circumstances heightened all of the feelings.

What does that mean for your divorce?

For a while it felt like divorces were stuck in the system and couples were stuck in divorce purgatory, but for many courts business is slowly returning to functional. But it looks different now than it did 6 months ago. Courts are conducting virtual pretrials and hearings, and even trials.

So often someone wants their day in court but when its virtual, there is something missing. There is a screen in between you and the judge and I would argue so much of the human element is removed. It might be less satisfying testifying through a screen. So what does that mean for you?

Mediation is an Opportunity to Resolve Your Case Despite the Pandemic.

This is an opportunity to turn to mediation to try and resolve your case. If you reach an agreement, you may never have to step foot in a courthouse… and trust me, that is a good thing. If you can’t resolve all of your issues, try and narrow down the issues. The less you ask a judge to decide, the better off you are and the greater likelihood you will get a date sooner than if you need a 3 day trial, for example.

While it seems like there is no end in sight for this pandemic, we will come out the other end eventually so you shouldn’t stay stuck. You can still take action and leave a toxic marriage or a relationship that just doesn’t fit anymore.

Also, if you haven’t tuned into my new podcast Happy Even After, please check it out.

It’s an unfiltered exploration of all things divorce, including interviews with experts and others who have navigated adversity and have come out on the other side thriving.