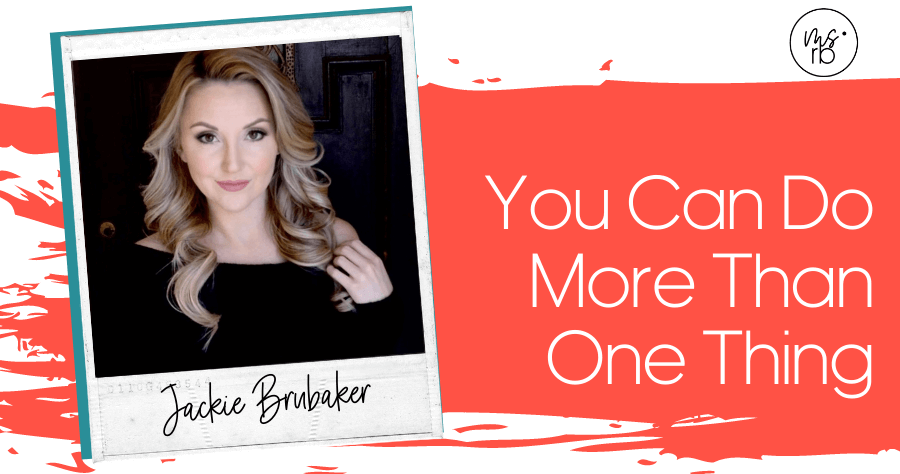 41. You Can Do More Than One Thing with Jackie Brubaker

You know those people who are triple-quadruple talented and you wonder how they do it all? Yeah, that’s my dear friend, @jackiebrubaker. She literally does it all and is so inspiring.

Jackie Brubaker was a writer-producer for television and worked in digital marketing for companies such as NBCUniversal and Conde Nast. She has worked on shows such as The Good Place, Hollywood Game Night, and The Carmichaels.

She recently published her first novel That Girl: A Novel. The novel is a semi-autobiographical romantic comedy about coming of age in LA and the TV and music industry. She is also the host of That Girl The Podcast.

​Jackie produces and hosts the food and home renovation web series Reluctant Housewife on YouTube where she teaches people “How to empower your inner domestic goddess”. It has been running weekly for six years.

Jackie was a signed singer-songwriter-producer for TV/film and recording artists, including herself, at RipTide Music Publishing. She released two records: “Home” in 2013 and “Jackie Brubaker and the Ex-Boyfriends” in 2011. She has since begun her journey back into the musical theater world after a #metoo experience in high school.

​She has won two Daytime Emmy Awards In 2012 and 2014 for her past career in TV as a makeup artist. Her career started in college while she pursued her music career. She has worked on countless celebrities and shows such as America’s Got Talent and Real Time with Bill Maher.

She owned and operated her award-winning bakery, Brubakery, from 2011-2014 where she served potent alcoholic cupcakes and was seen winning Food Network Cupcake Wars. She has since left baking behind professionally.

Now, she is coaching other women to follow their dreams, expand their worlds, and push their self-limiting beliefs.